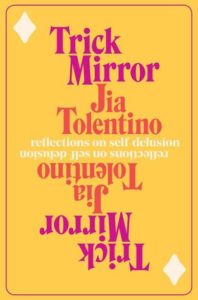 “Identity, according to Goffman, is a series of claims and promises.” (16)

“Capitalism has no land left to cultivate but the self. Everything is being cannibalized – not just goods and labor, but personality and relationships and attention.” (33)

“I worry that all this self-monitoring has made me, as I wrote in 2004, too conscious of what ‘Jia’ would do in this situation – that I’m in danger of becoming a ‘character to myself’.” (45)

“It’s very easy, under conditions of artificial but continually escalating obligation, to find yourself organizing your life around practices you find ridiculous and possibly indefensible. Women have known this intimately for a long time.” (69)

“...I was floored with dread and spiritual uselessness, the sense that I had failed myself and others, the fear that I would never again be useful to another human being.” (70)

“The default assumption tends to be that it is politically important to make sure that everyone can become, and feel, increasingly beautiful. We have hardly tried to imagine what it might look like if our culture could do the opposite – de-escalate the situation, make beauty matter less.” (80)

“How do you know but that it hurts a geranium’s feelings just to be called a geranium and nothing else? You wouldn’t like to be called nothing but a woman all the time.” (100)

“...but I couldn’t get myself to react. I felt very still and very empty, the way the eye of a tornado must feel, moving dully along in the middle of the surrounding hullabaloo.” (105)

“‘There is no good answer to being a woman; the art may instead lie in how we refuse the question.’ It is a literary statement of purpose, and later, Solnit wonders if the reduction of women to their domestic decision is, effectively, a literary problem. ‘We are given a single story line about what makes a good life, even though not a few who follow that story line have bad lives,’ she writes. ‘We speak as though there is one good plot with one happy outcome, while the myriad forms a life can take flower – and wither – all around us.’” (113)

“I still believe at some and alterable level that I can make it out of here. After all, it only took about seven years of flogging my own selfhood on the internet to get to a place where I could comfortably  afford to stop using Amazon to save 15 minutes and $5 at a time. I tell myself that these tiny scraps of relief and inconvenience and advantage will eventually accumulate into something transformative – one day I will ascend to an echelon where I won't have to compromise anymore, or I can really behave thoughtfully, where some imaginary future actions will cancel out all the self-interested scrabbling that came before. This is a useful fantasy, I think, but it is a fantasy. We are what we do, and we do what we're used to, and like so many people in my generation, I was released from adolescence to this fragile, frantic, unstable adulthood on a relentless demonstration that scamming pays.” (195)

“...thinking about how many women would read the piece and feel the need to compare their stories to Jackie’s – to play down the harm they’d faced, to preface their own experiences, as we already do, with ‘It wasn’t that bad.’” (201)