The Path Made Clear: Discovering Your Life's Direction and Purpose 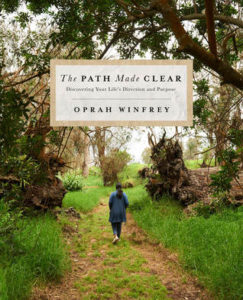 “If you’re rested, if your mind is in peace, and if you’re full of love and compassion, if you come from being and then feeling, and then self-reflection, then things will synchronistically fall into place.” Deepak Chopra (25)

“My deepest desire is for people to get still enough to identify what makes them unique and connect to hope, possibility, and fulfillment in all areas of their life.” (29)

“...when you align your personality with your purpose, no one can touch you” Gary Zukav (29)

Question your feelings to discover if that’s what you’re really feeling. Behind anger there is a source or something truer. (62-63 When Oprah talks about her mantras)

“We say, I know how to be broke and poor and struggle and suffer and be angry. I know how to do that. But when it comes to being vulnerable – because the core ingredient of trust is vulnerability – that’s unfamiliar.” Iyanla Vanzant (66)

“All dreams start from the core. Unless you are in total alignment with whatever you envision, the dream will get derailed. Your intention has to be pure.” (84)

“...before you can give yourself to someone else, you need to know what you stand for.” Mindy Kaling (102)

“You know why we’re tired? Because we’re pretending. It takes so much work to pretend. When you can be who you really are and find out where you fit and and function a place of comfort, then you stop working. You stop wrestling.” Bishop T.D. Jakes (110)

Oprah: Many times when you try to change, there’s a whole circle of people who actually liked you better the old way. And a lot of people are torn between that life and the life that’s calling for them.

Tracey Jackson: You develop languages with people and you develop patterns of behaviour. For instance: I’m the dysfunctional one; you’re the functional one. I’m the one in control. You’re the one who’s a little bit crazy. I’m always depressed. Whatever it may be. But when you change that, all of a sudden their role in your life is put into question. And they start having to question their own behaviour. (129)

“What follows ‘I am’ is what we’re inviting into our life. You say ‘I am tired.’ ‘I am frustrated.’ ‘I am lonely.’ Well, now you’ve invited more of that in. So the principle is to turn it around and invite what you want into your life. There’s a balance to it. I don’t think you’re denying the facts. You’re just not magnifying the negative. Rather, start saying, ‘I am a masterpiece. I am fearfully and wonderfully made. I am strong. I am talented.’ I think that is speaking to the core of what God’s put in each one of us. He has equipped us. He’s empowered us. We have what we need to fulfill our destiny. But we have to bring it out. And you can’t bring it out being against yourself.” Joel Osteen (133)

“If you are in a place where you’re more powerful than the people around you, listen as much as you talk. And if you’re less powerful, talk as much as you listen.” Gloria Steinem (139)

Charles Eisenstein: We live in communities that aren’t really communities because we don’t know the people around us. We’re surrounded by strangers. So we feel lonely. Our sense of being in the world depends on our relationships. I’m talking about really being known. When we don’t know our neighbours and we’re not participating in the natural world in an intimate way, then we feel alone. We don’t even know who we are. There’s a deficit of identity when we’re shrunk down into these little separate selves.

Oprah: Another world for suffering you use id separation, this feeling that you’re disconnected, even though you are in a room, or in a world where you are engaging with people all the time, but there’s this low-level sense of disconnection from community. That’s what you’re talking about. You say, “On some level, we all know better. This knowledge seldom finds clear articulation. So, instead we express it indirectly through covert and overt rebellion.” I found that so interesting. “Addiction. Self-sabotage. Procrastination. Laziness. Rage. Chronic fatigue. And depression. All are ways that we withhold our full participation in the program of life that we are offered.” Well said, sir.

Oprah: ….What you focus on expands.

LT: Exactly. And the way we have that kind of experience is by sharing. By contributing. By serving. By nourishing other people. That’s where real prosperity lives. (146)

“When I read a script, either my skin tingles, or my stomach churns. It’s that simple. If my skin tingles I know it’s something I must do. If my stomach churns I know it is something I cannot do. I have learned something from every single character that I’ve played. Something emotionally, spiritually, and psychologically true. I’ve never done a job just for money. I could not do anything that would not enhance humanity, especially for women.

It’s so easy when the money is flashed before you to allow that to govern your choices. But it’s more important to me to have peace of mind, body, and soul than to have all of the riches. When I put my head on my pillow at night I don’t require a drug, alcohol or anything else. Just fatigue.” Cicely Tyson (158)

Oprah: I thought it was interesting how you say we question everything else. We question race, religion, other life circumstances. But money – we just give it the power.

LT: It’s not that we have it. It has us. And we’re assigned it more power than human life. More power than the natural world. More power than our relationships with each other. And we all know that’s not true. But we live as if money’s more important than anything else. And it cripples us. It gives us tremendous anxiety and suffering. Somehow we drop this wonderful sense of value and worth and love and relationships we have in the rest of life and we become irritable and competitive and greedy. There is so much suffering in this world in people’s relationship with money. There’s lying. There are things people wish they had never done. Things they didn’t do that they wish they had done. You know, everybody has baggage.

O: Because of the silent power of money. That’s what you call it.

LT: Yes, we just think it will resolve everything. Everybody thinks, Well, if I just had 30 percent more, everything would be fine. But 30 percent more won’t really do it. Because when you get there, you want 30 percent more. We’re just completely addicted in a society that values money above all else. And it’s hurtful. It wounds us.

O: So in order to break that scarcity myth, that belief that there’s not enough, you say we need to live in the place of sufficiency.

LT: Yes. it’s not just there is not enough, it’s not enough. We’re not enough. I’m not enough. And that deficit relationship with ourselves is the source of so much of our suffering. It comes from this unconscious, unexamined mind-set I call “scarcity,” which has made up these myths. There is not enough to go around. And someone somewhere is always going to be left out.

O: And if you believe that, and buy into that, then that’s exactly what you will create.

“I think the greatest wound we’ve all experienced is somehow being rejected for being our authentic self. And as a result of that, we then try to be what we’re not to get approval, love, protection, safety, money, whatever. And the real need for all of us is to reconnect with the essence of who we really are and re-own all the disowned parts of ourselves, whether it’s our emotions, our spirituality, whatever. We all go around hiding parts of ourselves.

I was with a Buddhist teacher a number of years ago. And he said, “Let me give you the secret. If you were to meditate for twenty years, this is where you’d finally get to: Just be yourself. But be all of you.” Jack Canfield (165)

“We had something you don’t have when you have too much. And that is the ability to focus on the human beings around you.” Trevor Noah (169)

“No matter how far away from yourself you may have strayed, there is always a path back. You already know who you are and how to fulfill your destiny. And your ruby slippers are ready to carry you home.

Just before Dorothy clicks her heels, she shares the universal lesson that applies to each and every person here on earth: ‘If I ever go looking for my heart’s desire again, I won’t look any further than my own backyard. Because if it isn’t there, I never really lost it to begin with.’

The final chapter of this book is meant to illustrate that you have the power to discover your purpose and live your greatest truth. It doesn’t matter how many yellow brick roads you encounter – it has always been right there, at home, in your heart.” (176)

“All spiritual knowledge is not cognition. It’s recognition. You’re re-knowing what you deeply already knew. What you deeply intuited, suspected, desired, hoped for, that’s the soul.” Father Richard Rohr (178)

Oprah: What did you discover that you never knew you had?

Elizabeth Gilbert: I discovered I could take care of myself completely. I’ve got my own back. And i don’t just mean financially. I mean emotionally. I know that I became a responsible enough adult to be allowed to be alone with the child who is inside of me.

O: And you know that no matter what, you’re going to be all right.

EG: I’m going to be all right.

“My belief is that the whole purpose of life is to gain mastery, mastery of our emotions, or finances, our relationships, our consciousness through meditation, things like that. And it’s not about the stuff we achieve or amass in life. All that stuff can be taken away. People lose their fortunes. They lose their reputation. Beautiful spouses can die or leave you. But the mastery you achieve and who you become in the process of achieving those things can never be taken away. Never.” Jack Canfield (182)

Shawn Achor: That’s right. We get so focused on the glass, whether it’s half-full or half-empty, and we can argue forever between optimists and pessimists. Both can say the other is being unrealistic. But it wouldn’t matter if we looked at more of the world and saw that there’s a pitcher of water that’s sitting next to it.

O: Life is the pitcher.

SA: Life is the pitcher and we’re missing the pitcher when we’re so focused on that one element. It doesn’t matter if your glass if half-full or half-empty if there’s a pitcher of water right next to you. And we need to look at the full picture to see the full pitcher.