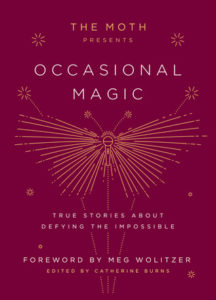 “Occasional magic refers to those moments of beauty, wonder and clarity, often stumbled upon, where we suddenly see a piece of truth about our life.” (Intro)

“But then I thought, What bad people? This was a sick child. I had to help him.” (23) Opposing Forces by Martha Ruiz-Perilla

The Value of Words by Maris Blechner (69) - whole story

“I need a time off, but I didn't need to go to a spa and breathe alpine air.

What I needed was to work, because not being busy and not working meant the wall was always there. I could feel it, and I wanted to push against that feeling. I couldn't wait to go back to work.

The second I could, I find myself into my job, taking every assignment. If they didn't give me an assignment, I would fight for: Egypt, Libya, nuclear meltdown in Japan, it didn't matter. I was doing it.

And I succeeded a little too well in pushing back against that wall and that feeling. And what I did in doing so was crate distance between myself and the things I was reporting on, the people I was reporting on.

So when that woman in Egypt fell into my chest and started crying, she destroyed that distance – she entirely eradicated it.

I was back at that wall, and the boy's voice was in my head.

But as painful as it was, I realize that it was necessary for me to bear witness fully to what was happening to someone beyond the couple of paragraphs they might actually get in a story.

And how does that make you feel? by Dan Kennedy

A Moment in Silence by Leland Melvin

“This was the moment. This wasn't my brain cognitively shifted and I felt connected with everyone on the planet. I thought about my race – the human race – as we connected and work together.” (184)

“I came out of that movie theatre, and I said, I know, I am totally being a baby about this songwriting thing.” (187)

My Post-Nuclear Family by Andrew Solomon

“And I thought just a species diversity is essential to keep the planet functional, so there's a need for diversity of love to sustain the ecosphere of kindness, and that anyone who rejected any bit of the love in the world was acting for the position of folly.” (203)

You Can Come Back by Joshua Wolf Shenk

“And I think I know what he meant. I think he meant I could book another flight, and I could come back to see him. But in the years since – the hard years, while he was still alive and especially since he died, three years later – that phrase has come to mean so much more to me.

It's come to mean you can go back to the places you're hurt and get a little better.

And you can come back to the people in your memory and spend a little bit more time with them.

Jump from a Plane by Ana Del Castillo

“I realize that part of it was I had all this love to give to my father and my brother that I didn't give. And when you don't give love, it rots inside you... I started figuring out how to tell people ‘I love you’ (even when I was angry).” (261)