The Courage to Be Disliked 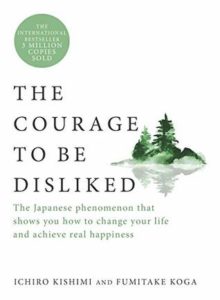 All problems are interpersonal.

Nobody is an enemy. Everyone is a comrade.

Do not try to interfere with other people’s tasks, only offer encouragement.

Most people live as if relationships are vertical, where one person is above another.

Even offering praise is an indicator of a vertical relationship because it implies the passing of judgment by a person of ability on a person of no ability; passing from inferiority to superiority. It’s like a verbal pat on the head. Patronising. p181

“We determine our own lives according to the meaning we give to those past experiences. Your life is not something that someone gives to you, but something you choose yourself, and you are the one who decides how you live.” p.13-14

“The important thing is not what one is born with but what use one makes of that equipment.” p.27

“He wants to live inside that realm of possibilities, where he can say that he could do it if only he had the time…” p37

“No matter what has occurred in your life up to this point, it should have no bearing at all on how you live from now on.” p39

“To get rid of one’s problems, all one can do is live in the universe all alone.” But one can’t do such thing. p51

“We cannot alter objective facts. But subjective interpretations can be altered as much as one likes. And we are inhabitants of a subjective world.” p58

“The one who boasts does so only out of a feeling of inferiority.” p68

“I withdrew from places that are preoccupied with winning and losing. When one is trying to be oneself, competition will inevitably get in the way.” p75

“The moment one is convinced that ‘I am right’ in an interpersonal relationship, one has already stepped into a power struggle.” p88

Re: love relationships and separation -- “The person feels this way because at some stage she has resolved to herself, I want to end this relationship, and she has been looking around for the material with which to end it. The other person hasn’t changed at all. It is her own goal that has changed.” p101

“All you can do with regard to your own life is choose the best path that you believe in. On the other hand, what kind of judgment do other people pass on that choice? That is the tasks of other people, and is not a matter you can do anything about.” p130

Re: being disliked -- “What should one do not to be disliked by anyone?...It is to constantly gauge other people’s feelings while swearing loyalty to all of them.” p140

“...other people are not living to satisfy your expectations.” p 169

“It is only when a person is able to feel that he has worth that he can possess courage.” p188

Be grateful simply for people’s being p193

“You focus...on the pain from the wounds...But if you are afraid to have confidence in others, in the long run you will not be able to build deep relationships with anyone.” p217