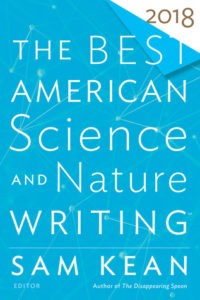 “Solastagia” - re: Glenn Albrecht – an existential grief for a vanished landscape

Jacqueline Detwiler - It’ll Take an Army to Kill the Emperor

“To understand and work on a complicated concept, a researcher has to shut out the noise of everything except his exact area of expertise. Someone who works on checkpoint inhibitor for therapies and melanoma, for example, might not see much use in reading about ovarian cancer detectors made out of nanocarbon – until suddenly it's the exact bridge to his own next level of progress.” 42-3

John Lanchester - The Case Against Civilization

“There is no document of civilization which is not at the same time a document of barbarism. He meant that every complicated and beautiful thing Humanity has ever made, if you look at it long enough, a shadow, a history of oppression.” 58

“The world has indeed got richer, but any shift and morals and values is hard to detect. Money and the value system around its acquisition are fully intact. Greed is still good.” 62

“this ritual is called insulting the meat, and it is designed to make sure the hunter doesn't get above himself and start thinking that he's better than anyone else...The egalitarian impulse, essential to the hunter-gatherers ability to live a life that is, on its own terms, affluent, but without abundance, without access, and without competitive acquisition. The secret ingredient seems to be the positive harnessing of the general human impulse to envy.” 62

“We physicians have been drawn to the toggle-switch model of disease and health: the biopsy was positive; the blood test was negative; the scan find no evidence of disease. Good germs, bad germs. Ecologists, meanwhile, talk about webs of nutrition, predation, climate, topography, all subjects a complex feedback loops, all context- dependent.To them, invasion is an equation, even a set of simultaneous equations.” 82

“In the field of oncology, holistic has become a patchouli-scented catch-all for untested folk remedies: raspberry leaf tea and juice cleanses. Still, as ambitious cancer researchers study soil as well as seed, one sees the beginning of a new approach. It would return us to the true meaning of ‘holistic’, to take the body, the organism, it's anatomy, its physiology – this infuriatingly intricate web – as a whole. Such an approach would help us understand the phenomenon in all its vexing diversity.” 83

JB Mackinnon - Tragedy of the Common

“Society has not yet answered the question of how much of the landscape ought to be shared with the non-human world.” (119)

“The extinction of one or another rarity...comes at no obvious cause to humans or the larger landscape….Yet the loss of any single rare species amounts mainly to an incremental waningin originality, redundancy, and specialization in the environment. A wound, but largely an invisible one.” 120

“When you lose the commonness of a common species, the consequences are immediate and undeniable. Plainly put, common species are the foundation of ecosystems.” 122

“I can sense that Collective human shrug, the one that says, we adopt, we survive…. We can live without this or that common species; the price is only a little more hardship, a little less awe. It may behoove us to pay attention to the pattern, though. If even the planet’s most widespread, abundant, and adaptable species are reaching tipping points, it is because of changes caused by humans have become so overwhelming, and it's capable, and complex.” 123

Whole article. It makes me feel guilty, but I agree with the arguments made. We need large-scale systems changes.

“Very few people, including those who think of themselves as environmentally conscious, are willing to make lifestyle changes that drastic. Beyond the practicalities, there is a social cost to diverging so sharply from your family and peer groups. It's not easy.” 136

“So again:  go forth and be green. You'll be happier and healthier. But do not mistake it for a solution to climate change. Only collective action and collective ingenuity can save us.” 137

Book rec - The Songs of Trees, The Forest Unseen by D. Haskell

Foot traffic is light, probably due to summer vacation. On a normal weekday at this hour, Haskell says the pedestrian flow would nearly flatten us.

“It’s typically a sea of humanity?” I ask.

More like intersecting rivers, he explains. “You’ve got one coming out of the subway and people flowing north and south. There’s a sinkhole with water bubbling up and being drawn back down.” There’s all this fast ­water, and then the area around the tree is a quiet pool to the side.

It’s illegal to obstruct pedestrian traffic in New York City, Haskell tells me, so if people need to stop they will duck under the tree. That links the plant to the city’s sociocultural power dynamics. Haskell calls the area around the tree “gendered and raced space.” Over two years, he has seen dozens of folks stop under the tree to check phones or ­adjust bags. Three-quarters were women of a variety of races; of the men, none were white. Most white guys dominate the middle of the sidewalk, yielding to no one. It’s white male privilege, he says, played out on the streets of New York.

A monster dump truck thunders past, grinding its gears. “Did you hear that!” Haskell yells. “Yes!” I yell back. How could I not? “No,” he says. “The sparrows.” The birds are flitting about the tree’s upper branches, swooping down occasionally to fetch crumbs. “I’m hearing the sparrows even though that truck just went by,” he says. “If you planted a spectrogram, it would pick up all the low frequencies, like that truck, and the house sparrows would register above that.” Sparrows and starlings, he explains, move their calls into higher registers to communicate over the urban rumble. Most bird species can’t adapt like that. They lose their acoustic social networks and disappear from urban areas. But sparrows and starlings, along with pigeons, occupy 80 percent of the world’s cities. “Their environment has changed them,” Haskell says.

Haskell considers our Bradford pear. “That tree isn’t an indi­vidual,” he says. “It’s a community.” The same could be said for the seemingly autonomous people zipping by—the bike messenger, the woman texting, the guy with the groceries. Just as Bradford pears and house sparrows have incorporated the city into their beings, so too have people, insists Haskell. “We’ve been yelling and contorting our faces to communicate over the noise,” he says. In his book, he cites other examples. “Pitch and genre of music change our perception of food and wine. A Tchaikovsky waltz … evokes a feeling of sophistication on the tongue that is absent when dining with a soundtrack of rock ­music.” Or consider any of New York’s street food, he says. It’s almost always salty or spicy, otherwise you’d ­hardly taste it over the city’s noise and smells. What we think of as inner thoughts and judgments, Haskell says, are very much shaped by external networks. The same rock band performing on this corner would sound louder performing at the same volume in a national park, because we expect national parks to be quieter.

“Haskell sometimes canceled class so that his students could experience distinguished visitors on campus, of any discipline” (166)

“Studies show that the survival rate for trees cared for by neighbors in the city is 100%, where as trees that are planted by municipal workers and looks on their own have a 60% chance of dying within a decade. Literally, the life of this tree depends on its connection to the community.” (167)

“Internally, Haskell had reached a crossroads. He could continue publishing papers….Or he could try something that access more parts of who he is.” (168)

Re: coming out unscathed under pressure = submission to what happens to you; acquiescence (169)

“If people were as connected to the community of life as other organisms, what did that say about the kind of environmental ethics human should have?” (170)

“That guy in the green shirt,” Haskell says, “that’s Stanley.” A 70-year-old African-­American man is glad-handing his way down the sidewalk. For most of the year except summer, Stanley Bethea sells children’s books from under the shade of our tree.

“How ya doin’?” Bethea says, recognizing Haskell. “The tree sure looks good, don’t it?”

“It does,” says Haskell.

Bethea can’t chat long. Kids are clamoring after him. “They get very upset if I don’t speak to them!” he says.

Had he stayed, Bethea could have told us everything that’s blooming in the city right now—the crape myrtles, hydrangeas, hibiscus, everything. “He’s tuned in to the flowering rhythms of this place,” Haskell says. “He’s been around a long time.”

Ultimately, Haskell contends that guys like Bethea—not academics like himself, or Sierra Club activists, or Washington bureaucrats—are best positioned to make good judgments about landscapes and ecosystems. Bethea is a deeply rooted member of this ecological community, as are the neighborhood folks caring for Manhattan’s street trees. They have a mature sense of ecological aesthetics based on belonging, and their ethic will stem from what they view as beautiful and whole. At his olive tree in Jerusalem, Haskell found Bethea’s counterparts in Israeli and Palestinian olive farmers. At his ceibo tree in Ecuador, it was the Waorani Indians. “Embodied, lived experiences within the community of life seems like a pretty good guide to me,” he says.

Joshua Rothman - A Science of the Soul

“You shouldn't trust your intuitions….Conceivability or inconceivability is a life's work; it's not something where you just screw up your head for a second….Darwin’s central lesson – everything in biology is gradual;...it arrives not in miraculous, instantaneous whoosh, but slowly, slowly – is too easily swept aside by our categorical habits of mind.” (187)

“Her expertise is broad. Anyone who gets into this kind of thing, you like a puzzle. You have to pull together all kinds of little pieces of information to try to figure it out, and it's very, very challenging.” (195-6)

“I knew it was over, she says. I couldn't work with those fossils at all anymore – that’s 6 million years of human evolution. Those fossils are why I went to grad school.” (210)

“They often felt as though the person who victimized on was untouchable. Not only did their perpetrators have tenure (meaning they can only be fired for extraordinary circumstances), but their work brought the university millions of grant dollars and immeasurable prestige. We have to stop privileging the science above the people who are doing it.” (212)

Kenneth Brower - The Starship or the Canoe

“To find freedom, without taking it from someone else.” (233)