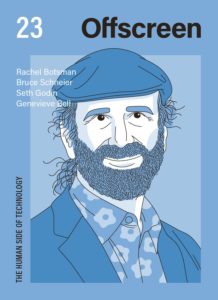 "One of the things that worries me the most is that we won't have a shared sense of reality, and we won't care about it."

"The writer Clay Shirky advances an insightful idea: institutions will always preserve the problems for which they are the solution."

Re: 'reality apathy' -
"We're so caught up in the realness of fake news and misinformation that we are not worrying or thinking enough about what's coming next. Think about what he's [Trump] done to information, and to the idea of evidence – the idea that a photograph or fact or testimony can prove whether something happened or not, or whether something is true or false – we are in serious trouble in the courts, in the world of science, and as a greater society.

I fear we've already gone beyond the tipping point, to be honest, and I think it's one of the most profound changes in human history. It's why we're seeing divisiveness in our politics, because it's really hard now for us to see what other people see, or understand why they believe what they believe. It's not even possible to comprehend the reality of someone who trusts Trump, for example, because that person's reality has been so manipulated. They see such a different picture."

"My personal opinion is that ideas, communities, platforms, and marketplaces all have a 'perfect state'. They have a size where you have equality. Everyone is treated well. Whatever it is, it flows. It works. But once you cross that threshold in pursuit of growth and profit, and because of a traditional way of thinking about business, it's going to end up in a mess.

There becomes a point where it doesn't matter what the founders' purpose and mission was at the outset, however wonderful and brilliant they might be. It's not that they're bad people: it's that the system will not allow you to act with integrity after you've passed a certain point, because there's no way you can keep the intentions you started with."

"We need a way for policymakers to get smart and agile about technology so the companies can't run rings around them or run way ahead of them."

Re: regulation and reactivity -
"My worry is that there will be some type of physical disaster where all the cars will crash, or, more realistically, all the cars of one particular make, year, and software build will crash. And then government will have to do something."

Re: when Google embedded attorneys into design teams so products already went through legal review –
"We need to do the same thing with regard to policy. We need policy expertise embedded in design from the beginning, so that somebody at day one will be there to ask questions about the social and policy implications of what's being built, so these things can be thought about before it's too late.

Just as we saw tech design include psychologists to work on user interface, and development teams include English majors as tech writers, I want to see technological design include social and political science expertise from the beginning. It's no longer sustainable to pretend that your system ends at the keyboard and screen. It encompasses the people who use it and the society it is embedded in. You have to think about your system that broadly."

"We think that there are tech solutions to unemployment, health care, inequality, privacy, and everything else. There aren't. Any solutions to those deep societal problems will have tech components, but they will fundamentally be social solutions."

"You should find people you care about and make change happen for them, then do it again. Figure out a way to do it sustainably, and then it might very well be your calling."

"One of the problems we have in the diversity and inclusions space is that it's easy to think it's simply about getting diverse voices into the room – it's also about making room for those voices to be honoured, finding ways for them to be comprehended, and ensuring that they don't become a spectacle."

"If you try to solve problems exactly as they've been presented to you, you might not be making enough room for the other possibilities in existence. One of the responsibilities you have as someone whose voice is in the room is to open up as much space for others as you can.

Questions, for me, are a way of suggesting that there are other answers, and other futures. If you ask enough questions you start to realise that things that once seemed really stable now are much more messy than you originally thought. Making things more messy might help others to realise there's far more to the puzzle than they imagined. So making a little bit of a mess seems like a good thing."