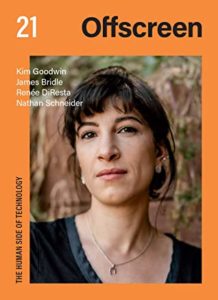 “By and large the ways in which you hope to impact people's lives positively are the things that you should be measuring. What is it that you claim to value as a company or organization? What good do you plan to do in the world? Is there some way in which you can measure that directly? Or can you at least measure people's perception of that? For the most part, you have to ask people directly.” (19)

“ Until we start measuring what we value, we will continue to overvalue what we measure.”

“We have to get to agreement within an organization about what we are not willing to do, and this is where organizational values come in.” (20)

“A simple question to start with is, ‘Here's what we think a good design is - now what could go wrong?’ It also matters who is asking the question, because if your team is largely composed of fairly privileged people – which, honestly, most of our teams are – then they're going to have a lot of blind spots. All the empathy workshops in the world will not get you to a useful, valuable answer.

There are lots of hidden ways in which those negative forces operate that you just can't think of if you've never been on the receiving end of them. By doing research with a broad, diverse population and having a diverse team in the middle of that decision-making process, you encourage statements like, ‘Hey you know, racism works like this’, or, ‘That is also consequence of sexism.’” (22)

“All of that is, to me, is the basis of a human-centered culture: repeated contact with people you're trying to serve.” (30)

“You can say anything now, because actually messing with the narrative – making it so incoherent and complex that people are desperate for simple, comprehensible stories – is the way in which you control power at present. It's not specifically controlling the narrative: it's really just banishing the possibility of any type of narrative apart from these incredibly simplistic ones.” (42-3)

“Everything we do is ‘putting a question to the universe’ – the problem at the moment is that we're not always listening to the answers that we're getting back.” (53)

“In troll-y spaces online, People very much talk in terms of warfare. They're excited by the fact that they are gaming algorithms to get their message out to massive numbers of people. They describe spreading political memes as a war. At the state-actor level, Russia describes it as political warfare. Meanwhile, the majority of people and governments in Western democracies are still thinking about it as a truth-in-narrative problem that can be solved merely by improving some faulty fact-checking.

”The information ecosystem is being exploited by small groups of people with emotionally resonant narratives who are intent upon creating and exploiting divisions in our culture in order to exert influence towards specific outcomes. And this manipulation of society, discourse, and elections is a significant and transformative threat.” (81)

“There has always been a recognition that ‘influence’ – be it political or social or corporate – matters. It's how we shape opinions. In a democratic Society, it's how we shape policy. The ability to influence opinions is directly correlated with the ability to make social and policy changes.  We have built a vast machine for enabling thoughts and Concepts to spread rapidly and  efficiently from person to person –  now our political conversations happen on an infrastructure that was built for viral advertising.

As more and more people have begun spending more and more time on platforms – and consuming news there as well –  propaganda influence communications have evolved to fit the information architecture of today. Influence operations and information war are not new concepts: what we see online is just the evolution of the tactic to fit the theater of the day.

It used to be that propaganda came in the form of leaflets, pamphlets, or posters. Now, we've experienced the evolution of propaganda into memes as a dominant form of political communication. Who would have thought that a square picture with five words on it was going to become the way that we communicate conflicting ideas about complex policy? But if you're producing political content on Facebook, the platforms algorithms will give you better distribution if you do just that. You evolve the way that you disseminate information to fit how people want to consume it.” (82-3)

“Where is the line between legitimate activism and manipulative tactics? How do you preserve freedom of expression alongside the realization that the system is being used on political communication? How do we think about where to place the guardrails to maximize freedom of expression, well at the same time recognizing that there are so many opportunities for ‘coordinated inauthentic behavior’, which is Facebook's term for it. How do we think about what the 2020 election is going to look like? What tactics are acceptable?” (87)

“I think we need something like an ISAC –  an Information Analysis and Sharing Center –  a more permanent standing body where these conversations happen on an extremely regular basis. We need to shift into a mindset of developing systems for thinking proactively as opposed to merely trying to react to crises when they arise.” (90)

“At the same time, I think there's no way that the solution can be found entirely within the platforms. It's of vital importance to have the channels of communication between the platforms and the government and researchers –  different types of stakeholders trying to work together towards solutions.” (90)

“We need to recognize that the current systems exist because people had a lot to gain from putting them in place, and they took deliberate steps to ensure that things were established that way.” (111)

“It's something to hope for down the road:  that we might be able to find spaces where we're digitally meeting across borders not just to talk and share memes, but to create spaces of shared ownership and shared democratic process, and governing together.” (116)

“Writing is the best form of networking. I can trace every pivotal moment in my career back to piece I've written on the internet. You're writing tells people who you are, how you think, and what you stand for. Take the time to crystallize your thoughts in writing and give people an opportunity to find you.”

“Step away from your work. I buffer in extra time on all my projects to love myself and chance to sleep on it. My biggest chance of having a breakthrough comes from stepping away and letting ideas marinate for a while.”

“Spend freely and generously when it comes to investing in yourself. If you're struggling with your career, get a career coach. If you need to upskill, sign up for a course. Not only will you overcome your weaknesses, you'll meet like-minded people who will understand and support you.”