My Twentieth Century Evening and Other Small Breakthroughs: The Nobel Lecture 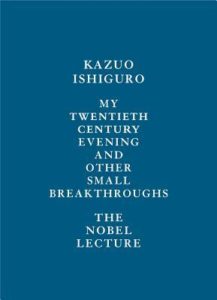 “I should say here that I have, on a number of other occasions, learned crucial lessons from the voices of singers. I refer here less to the lyrics being sung, and more to the actual singing. As we know, a human voice in song is capable of expressing an unfathomable complex blend of feelings…. Catching something in their voices, I've said to myself ‘Ah yes, that's it. That's what I need to capture in that scene. Something very close to that’. Often it's an emotion I can't quite put into words, but there it is, in the singer's voice, and now I've been given something to aim for.” (26)

“I'd often written about such individual struggling between forgetting and remembering. But in the future, what I really wish to do was to write a story about how a nation or community face these same questions. Does a nation remember and forget in much the same way as an individual does? Or are there important differences? What exactly are the memories of a nation? Where are they kept? How are they shaped and controlled? Are there times when forgetting is the only way to stop cycles of violence, or to stop a society disintegrating into chaos or war? On another hand, can stable, free nations really be built on foundations of willful amnesia and frustrated justice?”

“Important turning points in a writer's career – perhaps in many kinds of career – are like these. Often, they are small, scruffy moments. They're quiet, private sparks of revelation. They don't come often, and when they do, they may as well come without fanfare, unendorsed by mentors or colleagues. They must often compete for attention with louder, seemingly more urgent demands. Sometimes what they reveal may go against the grain of prevailing wisdom. But when they come, it's important to be able to recognize them for what they are. Or they'll slip through your hands.

I've been emphasizing here the small and the private, because essentially that's what my work is about. One person writing in a quiet room, trying to connect with another person reading in another quiet room – or maybe not so quiet – room.  Stories can entertain, sometimes teach or argue a point. But for me the essential thing is that they communicate feelings. That they appeal to what we share as human beings across our borders and divides. There are large glamorous Industries around stories; the book industry, the movie industry, the television industry, the theater industry. But in the end, stories are about one person saying to another:  This is the way it feels to me. Can you understand what I'm saying? Does it also feel this way to you?” (36-8)