I'm Still Here: Black Dignity in a World Made for Whiteness 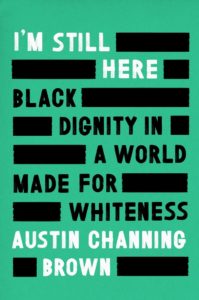 "I was working so hard to hide the culture of whiteness, only to discover that it was dripping from my body, pouring from my throat. All I wanted was to fit in, but everyone knew I was pretending."

"When I realized he was about to open up the floor for discussion, I folded myself into the chair, trying to make my body smaller, trying to disappear. Will you make me explain this? Will you ask me to tell this all-white class about the masks Black people wear?

I was surprised by own reaction. It felt deeply gratifying to have my own experience named, lifted up, discussed, considered worthy of everyone’s attention. And yet, I had no desire to be the Black spokesperson. It felt too risky. I wasn’t sure that my classmates had earned the right to know, to understand, to be given access to such a vulnerable place in my experience. For me, this was more than an educational exercise. This is how
we survive."

"I had been responsible for decoding teachers’ references to white middle-class experiences. It’s like when you’re sailing…or You know how when
you’re skiing, you have to…My white teachers had an unspoken commitment to the belief that we are all the same, a default setting that masked for them how often white culture bled into the curriculum."

"I worked as if white folks were at the center, the great hope, the linchpin, the key to racial justice and reconciliation—and so I contorted myself to be the voice white folks could hear. It’s amazing how white supremacy even invades programs aimed at seeking racial reconciliation"

"Far from an imposing beast, I found that white supremacy is more like a poison. It seeps into your mind, drip by drip, until it makes you wonder if your perception of reality is true."

"This is partly what makes the fragility of whiteness so damn dangerous. It ignores the personhood of people of color and instead makes the feelings of whiteness the most important thing"

"White people desperately want to believe that only the lonely, isolated 'whites only' club members are racist. This is why the word racist offends 'nice white people' so deeply. It challenges their self-identification as good people. Sadly, most white people are more worried about being called racist than about whether or not their actions are in fact racist or harmful"

"White people are notorious for trying to turn race conversations into debates, and then becoming angry or dismissive when people of color won’t participate. White people believe this is because people of color haven’t thought it through or are stumped by a well-made point. But the truth is, oftentimes people of color don’t have the time, energy, or willpower to teach the white person enough to turn the conversation into a real debate. To do so would be a ton of work."

"So I don’t accept confessions like these anymore. Nowadays, when someone confesses about their racist uncle or that time they said the n–word, I determine to offer a challenge toward transformation. For most confessions, this is as simple as asking, 'So what are you going to do differently?' The question lifts the weight off my shoulders and forces the person to move forward, resisting the easy comfort of having spoken the confession. The person could, of course, dissolve into excuses, but at that point the weight of that decision belongs to them, not to me."

"Whether or not anything I proposed manifested itself was not my responsibility—not my weight to carry. She could decide the significance of her own confession and determine what it would take to fulfill her own reflection on the moment. That was work I was happy to leave between her and the Holy Spirit."

"These folks want a pat on the back simply for arriving at the conclusion that having people of color around is good. But reconciliation is not about white feelings. It’s about diverting power and attention to the oppressed, toward the powerless. It’s not enough to dabble at diversity and inclusion while leaving the existing authority structure in place. Reconciliation demands more. Reconciliation is the pursuit of the impossible—an upside-down world where those who are powerful have relinquished that power to the margins. It’s reimagining an entirely different way of being with one another. Reconciliation requires imagination. It requires looking beyond what is to what could be. It looks beyond intentions to real outcomes, real hurts, real histories. How just, how equitable can our efforts be? What would it take to enact reparations, to make all things right?"

"This aloof kind of love is useless to me.

"This is the cool place from where I demand a love that matters. In this place, I see the sun setting behind me, its light as far away as the stars, and I let the limitations of hope settle over me. I possess not the strength of hope but its weakness, its fragility, its ability to die. Because I must demand anyway. It is my birthright. It is the culmination of everything my ancestors endured, of all that my parents taught me, of the Blackness that rescued me. How dare I consider surrender simply because I want the warmth of the sun? This warmth has not been promised to me. My faith does not require it. When the sun happens to shine, I bask in the rays. But I know I cannot stay there. That is not my place to stand. So I abide in the shadows, and let hope have its day and its death. It is my duty to live anyway."