Blockchain Chicken Farm: And Other Stories of Tech in China's Countryside 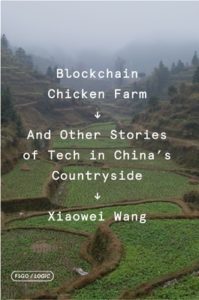 Ghosts in the Machine

"rural culture is marked by a different sense of time, a different cosmology . At the core of rural culture, he says , is a belief that the universe is already perfect as it is , and that our duty as humans is to maintain that harmony . This was a sentiment I heard often from farmers as I traveled throughout the countryside . One farmer told me that the future is a created concept , and that in the fields , in the long dark of winters , there is no future , because every day depends on tending to the present moment . An act of care . In contrast , urban culture is centered on the belief that the universe must be constantly corrected on its course , and that life is defined by the pleasure of overcoming future challenges."

On a Blockchain Chicken Farm in the Middle of Nowhere

"...this is not a China-specific problem : middle-class consumers globally expect constant availability of a range of foods." Reminds me of Alain de Botton quote about how our appetites are intertwined with capitalism.

Re: Blockchain –
"In recent years , the community has become increasingly well funded by venture capital , with millions of dollars being doled out to blockchain projects that only further solidify the political system we live in . When I look around at the community present at the conference , most of the developers are white and male ."

"...blockchain has yet to answer the question : If it takes power away from a central authority , can it truly put power back in the hands of the people , and not just a select group of people ? Will it serve as an infrastructure that amplifies trust , rather than increasing both mistrust and a singular reliance on technical infrastructure ? Will it provide ways to materially organize and enrich a community , rather than further accelerating financial systems that serve a select few ? Can the community expand and diversify itself , so that it does not reproduce the system of power and patriarchy that it is attempting to dismantle ?"

"By creating a system based on the assumption that humans are destructive and selfish , you only end up making those assumptions reality : a self - fulfilling prophecy"

"Transforming work into abstract , quantifiable , optimized labor erases 'any of the human and social purposes or the creative satisfactions that Work has always had in other societies.' It is easy to automate work using AI once you’ve made work devoid of meaning ."

"What we face are the more difficult questions about the meaning of work , and the ways we commit , communicate, and exist in relation to each other. Answering these questions means looking beyond the rhetoric sold to us by tech companies . What we stand to gain is nothing short of true pleasure, a recognition that we are not isolated individuals, floating in a closed world."

“No One Can Predict the Future”

"For my friend and many others , the data on a past crime remains committed to his record . And while his life changes — he becomes a friend , a husband , a doting father , an artist , an uncle — all the data points about his past remain static . Data cannot truly represent the full spectrum of life . It remains a thin slice of the world . There is always some kind of bias built in . Yet we imagine numbers to mean something , and this creates a common tendency that the statistician Philip B . Stark calls 'quantifauxcation' : the attempt to assign numbers or quantify phenomenon , as if quantitative data can offer certainty. Some strategies for quantifauxcation , says Stark , include saying things people want to believe , and adding opaque complexity to models , since complexity has become conflated with accuracy."

Gone Shopping in the Mountain Stronghold

"In a world that is so interconnected , with problems at a scale I cannot comprehend — climate change , plastics in the ocean , e - waste , political instability from globalization — the trick of shopping is that it makes me feel like I am doing something about those problems . I am asserting my agency , this agency that I am promised as an American . My small choice to either buy or not buy exerts control over the world as I want to see it — as I imagine it , maybe more eco - friendly , more sustainable . But what if I didn’t need to assert control at all ? What would it mean to define my daily life without any of the packages that arrive at my doorstep , to invent a life that required no material possessions ? And while the thought of giving up control sounds nice , in the meantime , I scroll , click , read , add to cart."

Welcome to My Pearl Party

"I think I keep showing up every day for the same reason Kristie and Nicly do . A sense of purpose , a sense of being needed . A community , no matter how small . I dutifully take the BART ride from the East Bay to San Francisco every day , to a beautifully generic office filled with standing desks and Aeron chairs . I show up despite knowing that the only thing my time and labor amount to is making rich men richer . The best parts of work are the interactions with other people , and even conflict gives a sense of community . I spend more time with my coworkers than with friends or partners . My daily life is either sleeping or working . It’s like having a family , but I wonder if this is the family I would actively choose . And on evening BART rides back home , I listen to music in my headphones , watching other people with startup - logo - embroidered backpacks scroll vigorously on their phones , smirking and laughing at the screens . I am still left with a sense of loneliness . Kristie’s next pearl party awaits me at home, along with a box of Green Chef and some packages from online New Age boutiques . Maybe that’s just a microcosm of the difficult work that we want to skip : the work of building a community upheld by boundlessness and belonging , a sense of purpose beyond reducing work and life to simple economics."

"The present stares back . The present moment promises nothing — it only demands . It demands building the communities that shift culture , that allow interbeing to thrive . It demands the work of awareness and care , instead of the tools of efficiency and scale . It demands seeing individual freedom as nothing more than a way for all of us to be oppressed . Most of all , the present demands the tender , honest work of attempting to make meaning , instead of looking , waiting , or wanting."