Being Mortal: Medicine and What Matters in the End 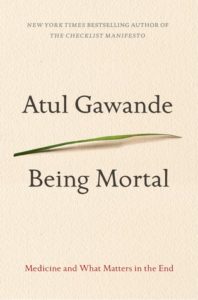 Total institutions – they break down spheres of life → everything in a single place (ex. Prisons, nursing homes) (73)

“And almost none does anyone sit down with you and try to figure out what living a life really means to under the circumstances, let alone help you make a home where that life becomes possible.

This is a consequence of a society that faces the final phase of the human life cycle by trying not to think about it. We end up with institutions that address any number of societal goals but never the goal that matters to the people who reside in them: how to make life worth living when we are weak and frail and can fend for ourselves anymore.” (77)

“... the care providers understood they were entering someone else's home, and that changed the power relations fundamentally.” (91) re: assisted living

“Every place has a deep-seated culture as to how things are done. Culture is the sum total of shared habits and expectation” (119)

“It is much harder to measure how much more worth people find in being alive than how many fewer drugs they depend on or how much longer they can live. But could anything matter more?” (125)

“The late, great philosopher Ronald dworkin recognize that there is a second, more compelling sense of autonomy. Whatever the limit sent revised we face, we want to retain autonomy – the freedom – to be the authors of our lives. This is the very marrow of being human…. The value of autonomy lies in the scheme of responsibility it creates: autonomy makes each of us responsible for shaping his own life according to some coherent and distinctive sense of character, conviction, and interests. It allows us to lead our own lives rather than be led along then, so that each of us can be, to the extent such a scheme of rights to make this possible, but he has made himself.

All we ask is to be allowed to remain the writers of our own story. That story is ever-changing. Over the course of our lives, we may encounter unimaginable difficulties. Our concerns and desires may shift. But whatever happens, we want to retain the freedom to shape our lives in ways consistent with our character and loyalties.

This is why the betrayals of body and mind that threatened to erase our character in memory Remain among our most awful tortures. The Battle of being mortal is the battle to maintain the Integrity of one's life – to avoid becoming so diminished or dissipated or subjugated that who you are becomes disconnected from who you were or her you want to be. Sickness and old-age make the struggle hard enough. The professionals and institutions return to should not make it worse. But we have at last entered an errand which an increasing number of them believes their job is not to confine people's choices, and the name of safety, but you expand them, in the name of loving a worthwhile life.” (140-1)

“...people who had substantive discussions with their doctor about their end-of-life preferences were far more likely to die at peace and in control of their situation and to spare their family anguish.” (177)

“There is no single way to take people with terminal illness through the process, but there are some rules, according to Block. You sit down. You make time. You're not determining whether they want treatment X vs treatment Y. You're trying to learn what's most important to them under the circumstances – so that you can provide information and advice on the approach that gives them their best chance of achieving it. This process requires as much listening is talking. If you are talking more than half of the time, Block says, you're talking too much.” (182)

Interpretive type vs paternalistic vs informative – re: patient-doctor relationship (201)

“But it's the meaning behind the information that people are looking for more than the facts. The best way to convey meaning is to tell people what the information means to you yourself” (206) Re: clinicians supplying info to patients

“At least two kinds of Courage are required in aging and sickness. The first is the courage to confront reality of mortality – the courage to seek out the truth of what is to be feared and what it is to be hoped. Such courage is difficult enough. We have many reasons to shrink from it. Even more daunting is the second kind of courage – the courage to act on the truth we find. The problem is that the wise course it's so freaking trans clear. For a long while, I thought this was simply because of uncertainty. When it is hard to know what will happen, it is hard to know what to do. But the challenge, I've come to see, is more fundamental than that. One has to decide whether one's fears or hopes are what should matter most.” (232)

“People seem to have two different selves – is experiencing self you enjoyed every moment equally and a remembrance also gives almost all the way to judgment afterward to two single point in time, the worst moments and the last moments. Remembering self seems to stick to the peak Andrew even when the end is an anomaly. Just a few minutes without paying at the end of their medical procedure dramatically reduced patients overall pain ratings even after they'd experienced more than half an hour of high level of pain.” (237)

“I am leery of suggesting the idea that endings are controllable. No one ever really has control. Physics and biology and accident ultimately have their way in our lives. But the point is that we are not help us either. Courage the strength to recognize both realities. We have them to act, to shape our stories, there was time goes on it is worth it narrower and narrower confines.A few conclusions become clear when we understand this: that our most cruel failure in how we treat the sick and the aged is a failure to recognize that they have priorities beyond merely being safe and living longer; that the chance to shape one story is essential to sustaining meaning in life; that we have the opportunity to refashion our institutions, our culture, and our conversations in ways that transform the possibilities for the last chapters of everyone's lives.” (243)

“But whatever we can offer, our interventions, and the risks and sacrifices they entail, are justified only if they serve the larger aims of a person's life. When we forget that, the suffering Winslet can be barbaric. When we remember it's the good we can do can be breathtaking.” (260)